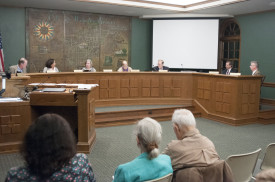 Webster Groves City Council postponed their vote on a moratorium which would regulate Webster University from requesting any new conditional use permits (CUPs) from the City of Webster Groves.

“It’s like going down a road and at the end of the road, what we’re hoping is something that will be nice and positive for these institutions,” Webster Groves Mayor Gerry Welch said.

The moratorium will not affect any CUPs the university has already proposed to the city. Projects not affected by the moratorium include: the parking garage extension, a substation and the interdisciplinary science building.

“The moratorium is being proposed so that text amendments could be considered. If they are considered, they have to go through a certain process. They have to start at plan commission level,” Starr said.

A new student center, additional housing, an arts building and an athletic/recreational facility would be affected by the moratorium if the university does not introduce the projects to the city by the time the council votes on the resolution.

Webster University is placed in a residential zoning district. Residential zoning districts have limitations to what residents can build on a parcel of land. Specifications for front-yards, backyard and heights for buildings are part of the restrictions the university has to go through. With institutional zoning, the university would go through similar restrictions based off of a campus master-plan to be reviewed by the city.

“The concept is to create a district for larger educational facilities where you have a set of base district regulations like that,” Starr said.