Loren Mueller said she didn’t have many options when picking classes to take her final semester at Webster University. She enrolled in multiple higher-level classes required for her degree. After a course she needed to graduate was canceled, Mueller fears she may not graduate on time.

Mueller, senior photography major, enrolled in Photo Workshop: Portfolio Development this fall, but the class was canceled due to low enrollment. Photo majors are required to take the same 17 courses and must select three additional photography courses from a pool of nine. Workshop is one of the additional courses students can choose from. To fill this requirement, Mueller registered for Photo Workshop: Self-Promotion, a Fall 2 photography course.

Seven students have registered for the course. A Webster policy enacted in fall 2008 restricts courses with fewer than 10 students enrolled.

“If this one gets canceled, I don’t know what I would do,” Mueller said. “This was my backup plan.”

Mueller said Professor Susan Stang, who teaches Photo Workshop: Self-Promotion, suggested students encourage classmates to enroll in the course and even write the dean of communications to explain why the course was necessary. 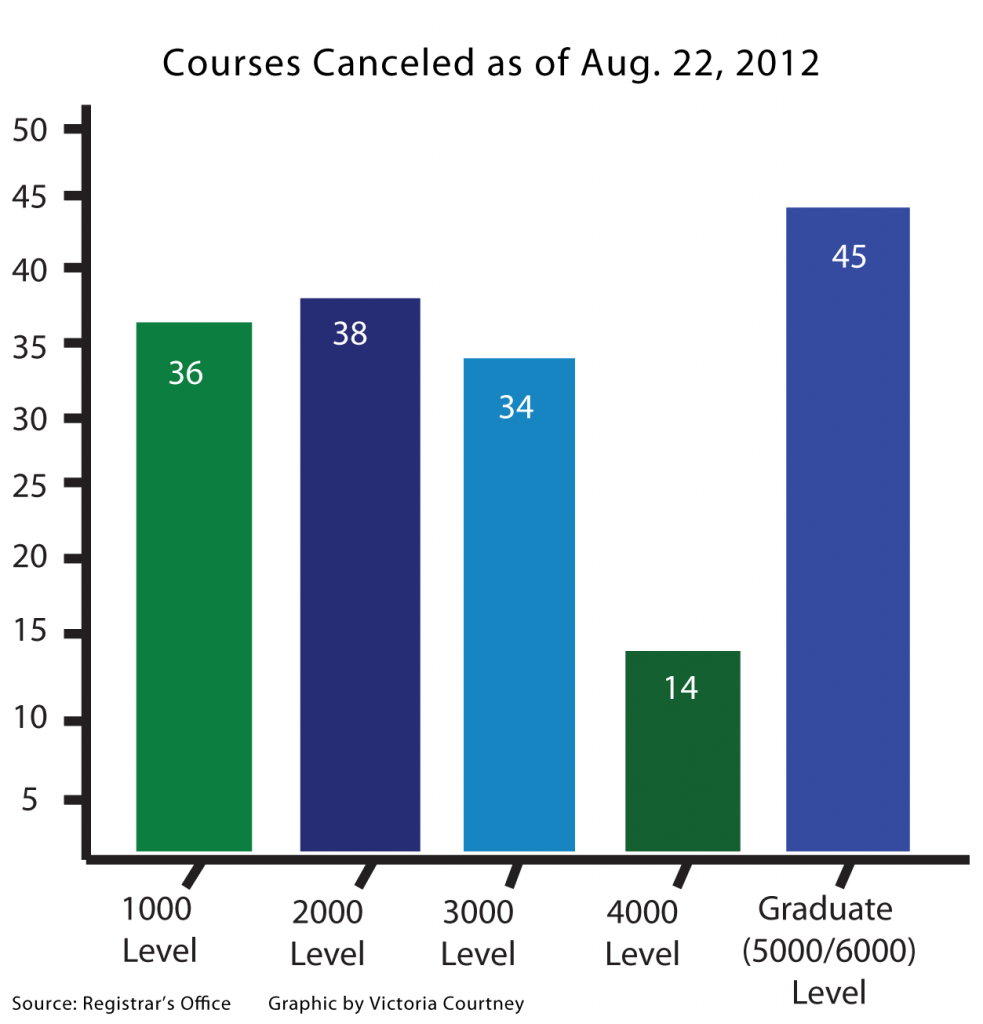 According to Webster policy, departments are allowed to keep a number of courses with fewer than 10 students, as long as that number stays under 15 percent of total courses. Joe Schuster, chair of the communications and journalism department, said courses saved from cancellation typically have five to nine enrolled students.

“You can make exceptions … as long as you can make a solid case that the course needs to be offered,” Schuster said. “We have to (ask), is it a required class? Is it going to solve unsolvable problems for students?”

Faculty Senate President Ralph Olliges said exceptions could also be made in the case of physical limitations.

“Obviously, if it’s equipment-related, for example, audio classes where there are eight stations in a lab, you can only have eight students,” Olliges said.

Senior scriptwriting major Trevor Harris was disappointed to learn Topics: Selling Your Work To Hollywood, a Fall 2 course that teaches the skill of pitching scripts to actors and producers, was canceled last week. Harris was able to find a replacement class but said he feels he’s going to miss out on learning crucial skills.

“If you can’t pitch, you might as well change your major because life’s going to be hard,” Harris said.

Harris was told the class was canceled due to low enrollment.  He believes low-enrolled courses are canceled largely for financial reasons.

Olliges said the primary reason for the course cancellation policy is to eliminate the negative effect a small class can have on education.

“It’s good practice to have a good class size where there’s interaction between students,” Olliges said.  “Can there be an exception made? Yes, but you’d rather want a class of 12 or 15.”

Senior photography major Alyssa Ohlman was enrolled in fall 2012 in a photography workshop course, which included a trip to New York City. When the course was canceled due to low enrollment, she found the alternative courses she would have taken had been canceled as well.

“It’s been stressful, just because I feel like I don’t have any choices any more,” Ohlman said. “I have to take what they tell me.”

After talking to an adviser, she found Photographic Gallery Management, a previously canceled course, was being offered as an independent study. Instead of attending normal classes, Ohlman meets once every two weeks with the professor.

Olliges said better communication between departments and students could be the solution.

“It should be planned out where students registering know that this course (they) need is only offered in fall or spring, that way they can plan their schedules,” Olliges said.

Ohlman, who graduates this spring, agreed.  She said she wished someone had explained to her when she could take specific courses during her time at Webster.

“At the end of my schooling, I’m finding that these classes I’ve heard such great things about in the past aren’t being offered,” Ohlman said. “Things former students have always been excited about— I don’t get those opportunities, and I want them. I want to learn as much as I can.”