(Webster Groves, March 15, 2011) Students have expressed concerns about the Webster University commencement, speaker selected for this years May 7 ceremony. Kit Bond, former Republican Senator from Missouri, was announced as the selected speaker, on Feb. 25.

On March 3, President Elizabeth Stroble addressed concerns voiced by students over Bond’s social conservatism at the Delegates Agenda. She emphasized Bond’s work as a diplomat in Southeast Asia and his continued support of Webster’s numerous out-of-state military campuses.

“The senators voting record did not factor into the decision,” Stroble said.

Students can nominate anyone as commencement speaker, Stroble said, but administrators are “hard pressed to find students that will nominate speakers.”

Though students are invited to nominate speakers during the selection process, Stroble said administrators must make a better effort to include more student input.

Dunne, who works in the Public Affairs office close to President Stroble, requested a five minute meeting through Stroble’s assistant to voice his concerns over Bond’s selection.

“Before I spoke with Stroble I was infuriated,” Dunne said. “I felt that his voting record, especially his stance on gay marriage and torture didn’t fit with the values or mission of Webster.”

Bond has supported anti-gay marriage measures on the state and federal level and has spoken favorably on controversial “enhanced interrogation techniques.” These qualities, Dunne said, sent the wrong message to students and families.

Dunne said he believes that the answer is student representation on the selection committee, which currently consists of select Board of Trustees members and Stroble.

“Commencement is for us,” Dunne said. “It’s for the students, so I believe we need a voice on the committee.”

Karen Luebbert, vice president and executive assistant to the president served on the committee for commencement speakers for the past two years, and said the administration is “completely open to the idea” of student representation on the committee.

But because it is a sub-committee of the Board of Trustees, any changes in the selection process can only be proposed to the board. 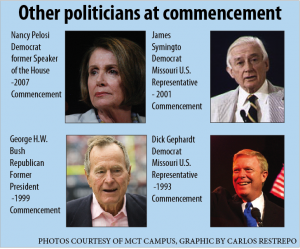 “We can make a recommendation to the board about adding a student, but they make the final decision if there is a change,” Luebbert said.

According to university bylaw, the Board of Trustees must select the commencement speaker, and the board must approve any changes to selection policy. Luebbert said administrators would consider submitting a recommendation to the board about student representation.

Dunne still plans on protesting at graduation, though he stressed “radical opposition does good for no one.”

Though prepared to turn his back on Bond at commencement, Dunne said he wanted students to protest in a reasonable, respectful way.

“Personally, it won’t ruin my commencement,” Dunne said. “It’s just important to make our point, but make it in the right way.”