Reggie Thomas, the pianist of the Reggie Thomas Trio, grew up listening to AM radio when all his favorite musicians like Frank Sinatra, B.B. King and The Eagles played on a single channel. The musician who influenced him most during his upbringing however, was Stevie Wonder.

Before he played “Overjoyed” in honor of Wonder, its original perfomer to conclude the Black History Month concert on February 7, he noted this song was from the heart.

“I never want to leave and be too cerebral,” Thomas said to the crowd. “We’re digging in with this one. With the recession, there’s been some hard times lately. Now, we’re taking it back home.”

As he sharply struck the black and white keys, he bobbed his head to the melody. Thomas closed his eyes, focusing on the feel of the piano’s vibrating tones as he played “Overjoyed.”

“Stevie’s music is a part of the soundtrack to my life,” Thomas said. “He has a pretty joyous view of life and that comes through even when you don’t hear lyrics. It comes through in his melodies.”

The trio’s version was their own jazz interpretation of Wonder’s pop hit.

“It’s about taking your life experiences and molding that into your music,” Thomas said. “I don’t necessarily tend to do the tunes the same way. I do something that is unique to me.” 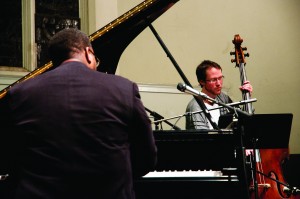 SCOTT LAYNE / The JournalAcclaimed pianist Reggie Thomas and bassist Nick Jost of The Reggie Thomas Trio perform jazz songs from other artists and original songs for the Black History Month Concert on Feb. 7 in the Winifred-Moore Auditorium.

The Reggie Thomas Trio formed when Thomas taught Jost and Morrison at Southern Illinois University Edwardsville, where Thomas is a professor. The trio has performed together for two and a half years.

“I started doing more trio work and used them more because I like the way it felt,” Thomas said. “It just felt good.”

Thomas turned to the crowd to announce the next song, “Pitter Patter Panther.”

It features a bass solo originally performed with bassist and St. Louis native Jimmy Blanton in 1940.

“One. Ah, two. Ah, one, two, three, four,” Thomas counted to introduce Jost and Morrison as he snapped his fingers.

Jost’s bass quickly laid the foundation for the song’s bouncy sound. He plucked and pressed the thick metal strings fast and hard during his solo.

Audience members rocked in their seats, bobbed their heads, snapped their fingers and tapped their feet the majority of the performance. Rajar Bishop, a junior music major, added several “Oh, yeah” interjections when he felt the music.

“The performance was very exciting, very moving,” said Bishop, also a jazz pianist. “I’ve been a fan of jazz since I was a kid. It’s encouraging as an upcoming jazz student and performer.”

“Reggie’s an incredible pianist,” Bishop said. “He’s my idea of a pianist.”

Paul DeMarinis, jazz professor, worked with Thomas in the past and attested to Thomas’ talents.

“We were at a jazz workshop in Poland at a club and the piano was so out of tune,” DeMarinis said. “It was a half step too low but Reggie said, ‘No problem. I’ll just play everything a half step up.’ He did. It was a three hour gig.”