After a year of tug-of-war in the United States, the points of battle in politics have come to a head as the midterm elections approach. Many debated policies affect the lives of college students and could potentially result in tight races for Missouri candidates.

Enter director of student engagement Jen Stewart, who created action plans for the All-In Campus Challenge and Voter Friendly Campus applications. With the help of Webster Votes,  students have gathered information on candidates, registration and policy through free events in the month of October.

These voter participation initiatives have partially contributed to the recent jump in students casting ballots across the country. According to the Washington Post, 66% of college students voted in the 2020 elections, a 14% increase since the 2018 midterms.

Stewart noted that this trend aligns with the behavior of Webster.  In the last midterm, Webster University students reported registering at a rate of 80.4% and the rate of voting was 64.4%. This translated overall to 51.8%, which was 20% higher than 2014 for Webster students and 12.7% higher than college students, in general, for 2018.

Outside of WebsterVotes, student institutions like Student Government Association (SGA) play a part in the move to obtain voters and political participation. SGA provides an understanding of how the structure of government works, “not just through encouraging students, but to see how smaller, local politics really can affect someone’s life in significant ways,” Stewart said. “It’s easy to focus on the national elections that spend a lot of money and garner a lot of media attention, but it’s the local elections with the lowest turnouts with the highest impact for potential on our lives.”

Both students and faculty have emphasized the importance of this particular upcoming election. Webster junior Kelly Lu from the School of Communications echoed the voices of many on the Webster Groves campus, touching on recent tumultuous events in the St. Louis area.

Starting at the beginning of the 2022 session on Jan. 5, Missouri legislature reported a surplus in state budget, giving way to ideas for redistricting and funding allocations. In the summer, because of the trigger laws in place, Missouri became the first state to overturn Roe v. Wade. Most recently, a student opened fire in Lu’s former high school, killing two and wounding others with an AR-15 rifle.

“After the many tragic occurrences that happened in St. Louis and the rest of Missouri the past few years, now is a vital time to vote,” Lu said. “Children should be wanted, not forced. Children should be safe in schools.”

Here’s a look at three headlining races to watch in St. Louis County and the surrounding area tomorrow:

Missouri is one of only seven states without an incumbent running for the Senate. In turn, this brought out a high-profile face-off between Valentine, a longtime party donor, former nurse and heiress to the Anheuser-Busch fortune, and Schmitt, the current attorney general. While Valentine aims to codify abortion protections, Schmitt was the individual who enacted Missouri’s abortion ban the day the Supreme Court reversed Roe vs. Wade.

In the district that includes part of St. Louis County, incumbent Bush and candidate Jones Jr. are shooting for the seat representing Hazelwood, Olivette, Jennings and St. Louis. Bush is a Ferguson activist and an advocate for defunding law enforcement, reallocating that money to mental health programs and social services. On the other hand, Jones Jr. seeks to increase police funding.

This amendment on the state ballot proposes to legalize the sale of recreational marijuana and automatic expungement of criminal records for certain marijuana-related offenses.

View the illustrated guide below on how, when and where to vote. 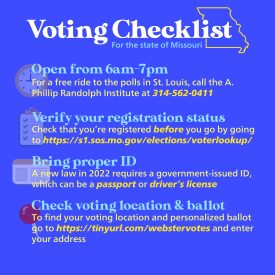