People are drawn to America for a variety of different reasons. For advertising and marketing  major Helio Qendro, the United States was both a place for freedom of expression and home to the world’s best pop stars.

Qendro was a child when his parents introduced him to ‘90s pop music icon Britney Spears. Qendro’s parents had the famous pop star’s first album on a cassette tape and he said he would dance to it every time they played it.

“I really liked to dance when I was little and I was dancing everywhere,” Qendro said.

Qendro said his love for American pop artists and their music has only grown since his arrival.

“My favorite right now is Lady Gaga,” Qendro said “I relate to her, she’s kinda eccentric. Doing things that are shocking solely because they are shocking.”

Qendro said he enjoys wearing makeup, something that is unusual for men in his home country of Albania. He likes to dress up and never passes on an opportunity to be provocative. For this reason, he loves events and holidays like Halloween.

Although Qendro likes to shock and cause controversy, he said he is not comfortable standing out in all situations.

“While I do love controversy, I don’t like being at the center of attention,” Qendro said. “I’ve had people from Albania that have told me ‘you don’t represent Albania, this is not what we’re about.” 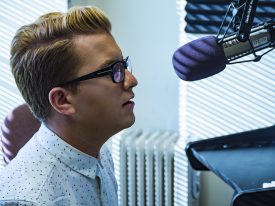 Qendro said the culture of Albania is very conservative and would not not approve of his fashion choices. He said he believed he would find more acceptance in American culture.

“I kinda grew up with American culture and from a very young age, knew that I didn’t really belong where I was growing up,” Qendro said.

Although he wanted to come to the U.S., he did not completely abandon his European heritage. Film production major Megan Griesenauer said she met Qendro through a mutual friend. The two bonded over their tastes in music, with Qendro sharing the music of pop artists from Albania and other European countries.

“We’ve listened to some Albanian music together and have watched some music videos,” Griesenauer said. “One singer I really like is Era Istrefi.”

Qendro has found creative freedom in his job with Webster’s radio station The Galaxy. Starting with his own radio show during his freshman year at Webster, Qendro has progressed from program manager to now general manager because of his passion for the station.

“He’s focused on being more consistent and focused on follow through, something the station’s been in need of for a while,” Singer said. “It would be very easy to just walk away from stuff and let things fall through the cracks. But he’s very deliberate about staying focused and keeping everybody focused.”

Singer also said Qendro has brought a sense of humility to the staff of the Galaxy in his position. As he has taken on leadership positions, Qendro makes an effort to involve himself as a leader and not just as a boss.

“He wants everybody involved and he wants them to feel comfortable coming to him and working with him, not for him,” Singer said.

Qendro said his high school was an intolerant environment, but he was able to cope with it a healthy way.

“I like to say I was born very confident, so if I believe that I’m doing something right, I don’t care what people think of it,” Qendro said. “So whenever someone says something like that, I just brush it off.”

After he graduates, Qendro said he hopes to take up an advertising job so he can stay in the U.S. 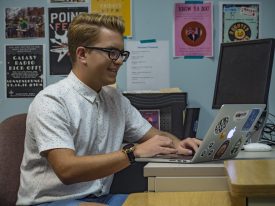 He said he hopes to work in fashion one day, but will have to find something stable to build his career on first.

“For now, my career choice is safer than I want it to be,” Qendro said. “But I feel like after a while, and after I get my documentation and everything, I think I will probably be a little more risky.”

Qendro spends all of his time in the U.S. during the school year, but said he usually travels back to Albania during the summer to visit his family.

“It feels like I’ve missed out on a lot of stuff that’s happened during the year,” Qendro said. “But fortunately, for three months, my family and I do a lot together. I try to skype them every week but it’s not the same as seeing them in person.”

After the 2016 presidential election, Qendro said the tone of the country has become less accepting and so living in America had become bittersweet. Despite these changes, he said he continues to view the country as a beacon of hope.

“It’s been a dream since I’ve been a child, and it’s very hard for me to give up on dreams, so I’m still here,” Qendro said.