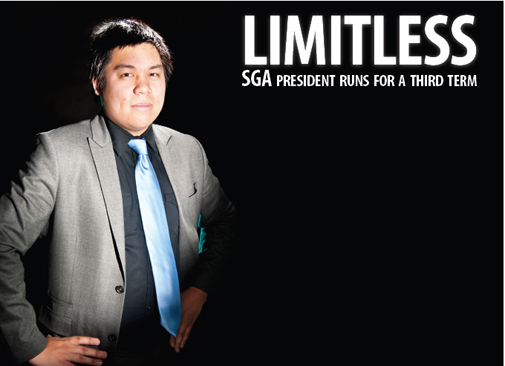 (Webster Groves, MO, April 13, 2011) When deciding whether to run for his third term as SGA president, Justin Raymundo had to ask himself — when is enough, enough?

“For me, it was whether this is what I want my entire college career to be defined by,” said Raymundo, 21. “Do I want this to be my legacy?”

He consulted friends, faculty and fellow student leaders. Should he step back? Should he allow someone else to take on the role? Some said yes. Others encouraged him to continue his presidency.

Raymundo felt the need to continue working with the student body and administration to make change. His close connections with both could allow him to do more. So much more.

Ultimately, the decision was Raymundo’s. He decided it wasn’t over yet.

Because he is running unopposed, it is expected Raymundo will become the first three-term SGA president since elections began in 1995. Jenny Meyer, SGA president in 1995, and president of the the SGA executive board, developed the constitution election process that year.

Since then, five SGA presidents, including Raymundo, have been elected for two consecutive years. Raymundo was elected to office as a sophomore, and therefore, has the opportunity to achieve a third-term. Matthias Jackson was the only other SGA president who was a sophomore.

“I want to deliver,” Raymundo said. “I want to make my three years mean something. For me, it’s an understanding that there can be amazing things done at this university and to have someone who is dedicated to make sure that we can get there is always important. I hope to be that person.”

One of the people Raymundo consulted with was John Ginsburg, director of the University Center and SGA advisor.
Ginsburg said a concern of Raymundo’s third term was the possibility of burning out. Ginsburg also warned Raymundo about creating a power vacuum, leaving the president who will follow him lost without guidance.

“On the other hand I said, ‘Do you really want to do this? Do you have a passion for it? Do you feel like you have unfinished business to take care of?’ I went over the pros and cons,” Ginsburg said.

Gina Jensen, Raymundo’s speech and debate coach, has seen Raymundo maintain a strong balance in his life and cannot forsee him burning out.

“I think with SGA, he keeps finding a way to keep advancing the school, speaking as the voice of the students and finding new projects to work on,” Jensen said. “I don’t think he’s going to burn out. He’s got too much energy to burn out.”

Sarah Tetley, director of first year experience and someone who Raymundo calls a friend, said she has very high expectations if he is elected.

The first line of Raymundo’s SGA intent to run stated “I do not believe in limits.” It is a play off of on the unlimited restriction on office terms, Raymundo said the statement shows how he wants to challenge a traditional, limited way of thinking.

“It’s a break away from the traditional approach to problem solving,” Raymundo said. “I want to be creative, fearless and confident in some of the solutions that we have. To go in directions that either people thought you can’t go or that’s not how we’ve done things.”

Raymundo said his problem-solving approach will aid him as he continues to fight for unresolved issues such as the Webster University and Webster Groves relationship and adding gender neutrality to the non-discrimination policy. As for new issues, Raymundo said he is waiting to see what arises on the Delegates’ Agenda in the fall.

“I am a gay leader,” Raymundo said. “I am an Asian-American and I was a very young person entering into what many have called an age-specific role.”

Raymundo and President Elizabeth Stroble started off their presidencies together. The week after Raymundo was announced SGA president, Stroble was announced as the university’s president.
Stroble conducted a meeting with SGA outgoing president Heather Sweeney and president-elect Raymundo.

“It was exciting to see and think within that first meeting there was a lot of change happening,” Raymundo said. “There was going to be a lot of change at this university and I was happy to be involved in it.”

The conversation marked the beginning of an ongoing dialogue between the two presidents. Raymundo has eventually become the ultimate liaison between students and administrators.

“Justin’s the first person we think of if there’s a student issue,” said Dr. Paul Carney, vice-president of enrollment and student affairs.

Raymundo’s relationship with the administration has been a factor in raising the level of professionalism expected in the SGA presidency.

“He went to work right away to be a president. That’s different than what we’ve seen in the past,” Ginsburg said. “He dresses up, meets with Stroble, he’s a supporter of Greeks, a fan at athletic games and an advocate for the LGBTQ community. I think that his web has been extensive and I think that will help him accomplish whatever his goals maybe.”

Raymundo admitted moving into his sophomore year he had fixated too much on the title — and his friends noticed.

“I told him, ‘You need to represent the people because we didn’t elect you for nothing,’ ” said Raymundo’s close friend Gary Jackson, a junior political science major. “ ‘If you’re going to do this, you need to get your heart into this because if you don’t, somebody else will do it.’ Then, he really changed his viewpoint of SGA. He has friends who will tell him off if he’s being a diva.”

Raymundo said he realized halfway through his sophomore year he couldn’t be the president he wanted to be if he was only in it for the title. There was a lot of work to do. He had to hone his love for Webster and serve the student body.

“This wasn’t a title for me — this wasn’t an exciting thing for me to put on my resume. This was a position that I believed in and that I knew I could do well,” Raymundo said.

Administrators placed a student on the institutional planning committee that year, an issue Raymundo pushed for at the 2009 Delegate’s Agenda.

“He was so ready to accomplish what he promised to us and everybody,” Gary Jackson said. “He went after it. He attacked it right away. He kept his promises.”

“Even if it doesn’t get approved, I know people like Justin will carry that forward as something they are also passionate about and can achieve the results I’ve been looking for the past two years,” Dunne said.

Dunne has watched Raymundo blossom since they met two years ago.

However, Raymundo’s visibility on campus has caused him to make sacrifices in his personal life. Because of Raymundo’s status, his closeted ex-boyfriends feared being in the lime light with Raymundo.

Raymundo picked his passion for his presidency over the relationship. When Raymundo’s emotions sidetracked him from his work, friends like Gary Jackson helped Raymundo set his priorities straight again.

“He’s back. He’s focused on what he came to do,” Gary Jackson said. “He showed us that he’s human. He’s not Superman.”

Though proud of his presidency, Raymundo said he does not want to be remembered as the first SGA three-term president, if elected. He said he is a regular 21-year-old with the stresses of paying for college, getting internships, applying for graduate schools, finding a job and even falling in love. He said he would rather be remembered as a funny friend.

“I think if I walk away from this university and people hold me up as the man who was student body president for three years then I don’t think I accomplished what I wanted to as just a person,” Raymundo said. “That’s really important to me — remembering that this has been a position that I love to fill but at the end of the day, I’m still Justin.”