Correction in this story: The running after Saturday’s games was started as punishment originally . They team runs after the games for conditioning.

Entering the weekend of March 21, the Webster University baseball team had not lost a regular season St. Louis Intercollegiate Athletic Conference (SLIAC) game since 2013. But that streak would not last to the end of Saturday. 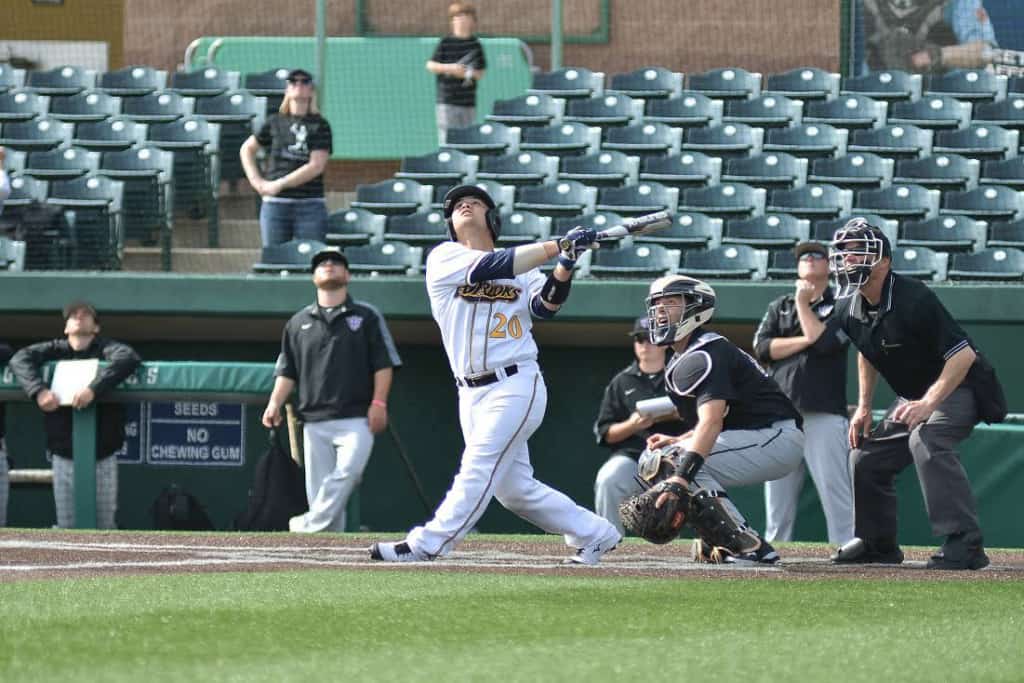 The Gorlok offense was powered by first baseman Kyle Uhrich, who picked up two home runs and four RBIs. On the mound, pitching ace C. J. Lee started the game and led the team by allowing just one run over 5 2/3 innings. He also picked up his second win of the season.

The Gorloks took to the field in the second game with freshman Josh Fleming on the mound.

Webster lost the game and wasted a solid pitching performance, something Head Coach Bill Kurich said has been the main problem this season.

“With the team earned run average that we’ve got right now, it’s almost sickening that we’re only 10-5,” Kurich said. “You let good pitching like that go to waste five times,—that’s tough to swallow.”

The Gorloks fell behind in the third after two errors allowed the first run of the game to score. Chayancze Stirbis of Iowa Wesleyan reached second base on a fielding error, then came around to score on a stolen base and throwing error.

Webster manufactured their first run of the game when sophomore third baseman Connor Hogan singled, stole two bases and scored from third on a wild pitch.

Wesleyan took the lead back in the seventh inning, Fleming’s last full inning of the game, but Webster pulled even with a game-tying solo home run by Dylan Rajkovich, who came off the bench earlier in the game.

In the ninth, senior Dylan Dean Smith struck out two, but allowed a double, threw a wild pitch that advanced the runner to third and allowed the run to score on a two-out infield single.

In the bottom of the ninth, three walks loaded the bases for the Gorloks with one out. Iowa Wesleyan’s starting pitcher Jeff Burdett remained in the game, and Rajkovich came to the plate again with a chance to tie or win. But he bounced into a double play, ending the Gorloks’ ninth inning and their more than a year-long conference winning streak.

Kurich took to the field to talk to his players after errors and ineffective offense led to the loss. When he was finished, he had them line up on the foul line and run out to center field numerous times for conditioning.

The message was received, as Webster returned to GCS Ballpark on Sunday for another doubleheader. Over the two games on Sunday, Webster outscored their opponents by a combined 23 runs.

In this first Sunday game, they got revenge against Iowa Wesleyan. Webster dominated from start to finish and piled on with a 10-run sixth inning, winning 16-1 in seven innings.

The second game, against Illinois Wesleyan, was dominated by the Gorloks as well. Webster scored 11 runs in the first four innings and cruised to a 13-4 victory.

The offense was paced by three players. Senior Jeff Kammer, who was named to the d3baseball.com national team of the week, had seven hits in eight at-bats and four RBIs over the two games. Junior Blake Thomas had four hits and seven RBIs.

“Blake can roll out of bed and hit a fastball,” Kurich said. “He’s a very natural hitter. He’s got great hands, and he can hit the baseball hard.”

But just as he was in Saturday’s games, the offensive star of Sunday was Kyle Uhrich. He had two three-run home runs over the course of the two games, one of which hit high on the light tower in left field.

“He’s been outstanding for us with the bat, come through for us in big spots and has a ton of power,” Kurich said of the sophomore stand-out.

Uhrich now has six home runs on the season, which puts him on pace to break the Webster single-season home run record of 16 by Victor Valdez in 2010.

In addition to his offensive explosion, Uhrich took to the mound to finish off the final game. In what was his second pitching appearance of the season, Uhrich struck out two in one inning of work.

“He’s an outstanding pitcher, and he can run the ball up there at 90 miles per hour,” Kurich said.

After the weekend the Gorloks are 10-5. Webster’s next game will be in Louisville, Kentucky against Spalding University on March 28.